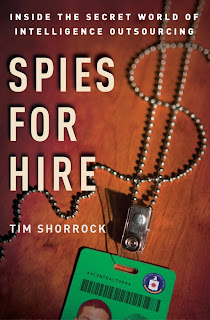 The central importance of BAH becomes clear when one considers some of the stunning information unearthed by reporter Tim Shorrock in his new book Spies for Hire: The Secret World of Intelligence Outsourcing (Simon & Schuster: New York, 2008).
In Chapter 2, titled "Booz Allen Hamilton and the Shadow IC," Shorrock informs us that the spy business is booming, and BAH enjoys top ranking among those contractors who serve the "intelligence community."
In 2002, Booz Allen had more than 1000 former intelligence officers on its staff, and its government contracts rose dramatically after 911,
"from $626,000 in 2000 to $1.6 billion in 2006. Most of the latter figure, $932 million, was with the Department of Defense, where Booz Allen's major customers included the NSA, the Army, the Air Force, the Defense Logistics Agency, and the National Guard. In 2006, it was one of seven firms awarded a ten-year contract to bid on up to $20 billion worth of work in command, control, communications, computers, intelligence, surveillance and reconnaisance -- a mouthful of a term usually referred to as C4ISR -- for the Army's Communications and Electronics Command, which is based in Fort Monmouth, New Jersey.

The term C4ISR is a perfect descriptor for Artificial Telepathy -- a powerful fusion of signal processing technologies that allows technicians to remotely gather and collect human intelligence (HUMINT) from the brain signals (SIGINT) of other human beings. As with C4ISR, Artificial Telepathy automates "signals collection" (eavesdropping) and "intelligence analysis" (figuring out what people intend to do) by utilizing satellites and computers, and the overall goal is military command and control.

Indeed, one might define Artificial Telepathy as a subset of C4ISR with a special focus on neurology, psychology and mind control. Artificial Telepathy is an exotic form of C4ISR that allows warriors to communicate nonvocally with soldiers in the field, enables spies and intelligence agents to perform reconnaisance and surveillance nonlocally by means of "remote viewing," and allows military officers to command and control the behavior of human minds at a distance, with the artificial aid of carefully networked satellite and computer technology.

Booz Allen Hamilton certainly has close ties to the contractors who worked on the Pentagon's "Stargate" program for psychic spying in the 1990s, and it took a lead role in development of the NSA's "Total Information Awareness" projects, mentioned in earlier posts.

BAH must certainly be on the short list of firms capable of designing and launching a system of space-based, mind-invasive weaponry. It has all the people, pull and know-how needed to put an "electronic concentration camp system" in place.

A Gallery of Rogues

This collection of biographical profiles below is largely based the Wikipedia article at this link: http://en.wikipedia.org/wiki/Booz_Allen_Hamilton

Photographs have been added (where possible) and additional materials illustrate the links between each person and artificial telepathy. In other words, any significant article that turns up from a Google search on the Booz Allen officer's name + "Artificial Telepathy" or "psychotronics" or "mind control" is listed and hyperlinked beneath the person's profile. 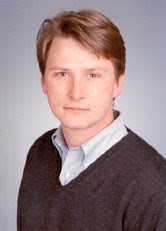 Jonathan's father, also named Jonathan Bush, is the brother of George H.W. Bush. With regard to CIA mind control programs, it must be noted that George H.W. Bush was briefly the director of CIA in 1975, a year when the Church Committee first exposed the role of the CIA in mind control and assassination programs.
http://www.the7thfire.com/bush15.htm

Jonathan himself has no known connection to any such program. He was a founding member of Booz-Allen's Managed Care strategy group, and presently works as a consultant to Agilence Health Advisors.
http://www.agilenceadvisors.com/team_bios.html 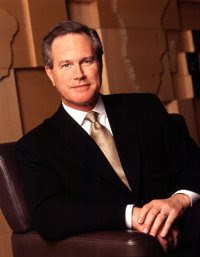 Mr. Collins serves on the Board of Directors of The Boeing Company, Cargill, Inc. and U.S. Bancorp. He is a member of the Board of Overseers of the Wharton School at the University of Pennsylvania [6] and the Board of Visitors for the Farmer School of Business at Miami University[7]. He also was a previous Chairman of AdvaMed, the medical technology industry association, and has served on the boards of numerous civic organizations.

The people at Mind Control Forums consider Medtronics Inc. of Minneapolis, MN, to be among the foremost producers of deep-brain implant devices:
http://www.mindcontrolforums.com/news/fda-approves-implant-parkinsons.htm

The application of brain implant devices to Artificial Telepathy and mind control is obvious:

If computer power continues to develop rapidly, while physical processors continue to shrink in size, future enhancement might easily allow a person to attain "network enabled telepathy," or the ability to immediately access and manipulate massive amounts of information with a simple thought.
http://www.aaas.org/spp/sfrl/projects/human_enhancement/achievingHEindex.shtml

Medtronic has certainly developed brain chips, notably one that was approved for treatment of Parkinson's Disease by the U.S. Food and Drug Administration in 1997. According to journalist Adam Keiper:

The implant is often called a “brain pacemaker” or a “neurostimulator”; Medtronic uses brand names like Soletra and Kinetra. The treatment goes by the straightforward name “Deep Brain Stimulation.” In the procedure, a tiny electrode with four contacts is permanently placed deep in the brain. It is connected by subcutaneous wire to a device implanted under the skin of the chest; this device delivers electrical pulses up the wire to the electrode in the brain. (Many patients are given two electrodes and two pulse generating devices, one for each side of the body.) The device in the chest can be programmed by remote control, so the patient’s doctor can pick which of the four contacts get triggered and can control the width, frequency, and voltage of the electrical pulse. Patients themselves aren’t given the same level of control, but they can use a handheld magnet or a remote control to start or stop the pulses.

Please note that in addition to serving Booz-Allen Hamilton and Medtronics, Mr. Collins also serves as a member of the board at Boeing. The folks at Mind Control Forum consider Boeing to be a "CIA Front Company": http://www.mindcontrolforums.com/cia500.htm

Headquartered in St. Louis, MO, Boeing is certainly a major defense contractor -- a $32.4 billion company with 72,000 employees worldwide. Together with L-3 Communications it helped the Air Force Research Laboratory at Kirtland AFB, New Mexico, develop an Advanced Tactical Laser system that can be mounted on a C-130H aircraft: http://aftermathnews.wordpress.com/2007/12/12/boeing-installs-high-energy-death-ray-on-c-130-gunship/ 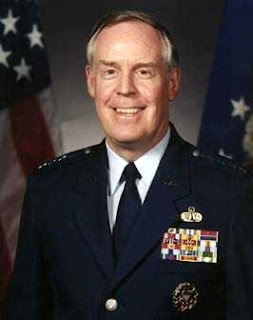 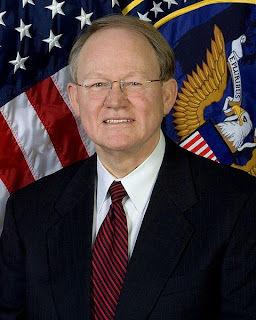 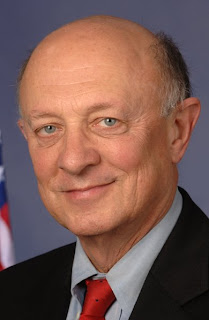 Bruce Pasternack - Former President and CEO of Special Olympics International, former Director of Energy Policy for the Federal Energy Administration, Former board member BEA Systems (NASDAQ: BEAS), currently on the board of trustees of Cooper Union and serves as a board member for Codexis, Quantum Corporation (NYSE: QTM) and Symyx Technologies as well. Also, was the author of Results and The Centerless Corporation, books on strategy and business.