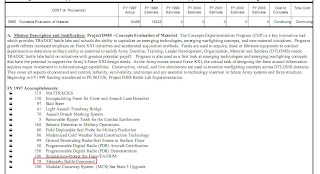 A declassified FY 1999 Army budget estimate submitted to Congress in February 1998 indicates that, more than 10 years ago, the U.S. Army was planning to group all of its telepathy operations into a single Telepathy Battle Command. See the PDF at this link: http://www.asafm.army.mil/budget/fybm/fy99/rforms/vol3.pdf
Volume 3 Page 1197 lists the budget for Project D985 - Concepts Evaluation 0f Materiel - and indicates among its FY 1997 Accomplishments a simple, one-line project designated "Telepathy Battle Command." No fooling. The Army was testing out the concept of a Telepathy Battle Command.
There was no reason for the U.S. Army to test the concept of a "telepathy battle command" if it had not already tested or fielded telepathic weapons themselves. At the very least, this line item of the 1998 budget indicates that the U.S. Army takes the threat of telepathic battle and telepathic weapon systems seriously. They certainly were throwing serious money at it.
For more on how the U.S. Army has organized its conventional "Battle Command" system, see this link: http://en.wikipedia.org/wiki/Army_Battle_Command_System

Is There An Active and Operational Telepathy Battle Command?
If the U.S. Army has built an active and operational Telepathy Battle Command center, it may be part of the Army's strategic "Command Post of the Future" (CPOF) system. However, CPOF places a greater emphasis on computers and digital imagery than "exotic" systems like telepathy. For more on CPOF, see:
http://en.wikipedia.org/wiki/Command_Post_of_the_Future
Paul Smith's book Reading The Enemy's Mind and Jon Ronson's book The Men Who Stare At Goats both suggest that the DoD runs its telepathy programs through the Defense Intelligence Agency and Army INSCOM (Intelligence and Security Command). Both Army INSCOM and the National Security Agency are located at Ft. Meade, MD, which makes that town the most likely "hub" location.
It is also possible that elements of an Army "Telepathy Battle Command" have been placed at highly classified "black" facilities near Ft. Bragg, NC, headquarters of the Army Special Operations Command and home of the Army's Psychological Operations Directorate.

Ronson's book strongly suggests involvement by the Army's 9th Psyop Battalion, which is part of the 4th Psychological Operations Group:
http://www.globalsecurity.org/military/agency/army/9psyopbn.htm
Posted by M at 8:41 PM