Silent Speech: How To "Read Thoughts" with SVR 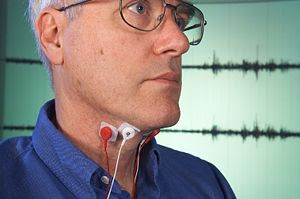 You may not realize it, but when you think to yourself, your subconscious mind often forms the words, as if trying to speak. These "subvocal" words are then sent to the voice box, where they make the vocal chords hum.

Here's the spooky part: NASA has developed sensors that can read the vibrations made by silent, said-to-self speech. The digital signals from these sensors can be fed to a computer software program that interprets the vibrations and translates them into artificial speech or into written text. The text, in turn, can be sent by phone line to a person hundreds of miles away.

For all practical purposes, these machines can be used to hear or "read" the unspoken thoughts of another human being. It amounts to artificial mind reading.

For a Wikipedia article on subvocal recognition (SVR), see the link here:

For an interesting article published by Forbes magazine in 2006 titled "The Silent Speaker":

As one might imagine, the device has many practical applications for astronauts, scuba divers or people with disabilities. The Ambient Corporation, for example, is now marketing a device called the Audeo that helps people speak:

On February 26, 2008 the Ambient Corporation demonstrated what it called the world's first voiceless phone call:

The covert applications of "silent speech" technology are also fairly obvious. To communicate secretly at a business meeting, one could potentially wear sensors under a turtle neck and transmit one's thoughts to a business partner wearing a bluetooth phone. Such a device could also be used to cheat at cards, to steal any data that can be seen and read, or to give silent orders among soldiers on a battlefield.

Alarmingly, the perfection of such equipment implies that at some time in the near future, remote sensors might be able to read silent, said-to-self thoughts without the target's knowledge or consent.

Researcher Nick Begich discusses the bioethics of using such "brainphones" and Neurophone-like devices in this 8-minute video, titled "The Battle for Your Mind":

Affordable Luxurious Wedding Dress Blog said...
This comment has been removed by a blog administrator.
8:07 PM