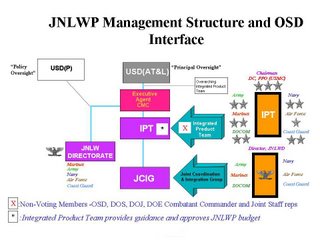 Was Artificial Telepathy developed by the NSA, the CIA, the FBI, Homeland Security, NASA or the U. S. military?

This question unreasonably assumes that a single agency or laboratory could research and develop such an exotic weapon all alone. It’s much more reasonable to assume that all of these agencies have combined forces. They’ve probably hidden their secret weapon in plain sight: Under the aegis of the Joint Non-Lethal Weapons Program.

For a brief history of the Joint Non-Lethal Weapons Program, see:
http://www.iniwic.net/

Second, as a weapons system, Artificial Telepathy requires the combination of Directed Energy Weapons (weapons that direct laser, microwave, millimeter wave and infrared energy at targets), high-tech sensors, space-based platforms and supercomputers capable of simulating the behavior of a human brain. The laboratories that serve JNLWP provide all of that. For an overview of the jaw-dropping capabilities of the labs that support the JNLWP, see the Joint Non-Lethal Weapons Links page at:

Third, the Joint Non-Lethal Weapons Program brings together weapons scientists from the National Institute of Justice (NIJ), the Department of Justice (DOJ), and all branches of the U.S. military – Army, Air Force, Navy, Marines and Coast Guard. The JNLWP is headquartered at Quantico, VA, home of the FBI training academy. What better place to base an inter-service mind control program?

Fourth, as a joint military-civilian program, the JNLWP provides the perfect means for sharing military weapons technology with law enforcement agencies. The military has no legal right to perform domestic surveillance operations, but the Department of Justice (which oversees the FBI) does. With the help of the FBI and other law enforcement intelligence units, the JNLWP can take military personnel from the Special Operations Division, "sheepdip" them (that is, put them in civilian clothes with valid law enforcement credentials) and send them to work zapping people under the guise of counterintelligence or counterterrorism operations.

Finally, evidence from the open literature suggests that those military scientists most strongly associated with the research of Artificial Telepathy are also very strongly associated with Non-Lethal Weapons. For example, Lt. Col. John Alexander, a man notorious for his telepathy experiments at Psi-Tech, was until 1995 Los Alamos National Laboratory’s manager of non-lethal defense research. He has also been instrumental in organizing three Non-Lethal Weapons conventions. Likewise, Dr. William L. Baker, Chief Scientist at the Directed Energy Directorate of the Air Force Research Laboratory, Kirtland Air Force Base, NM has reported that his lab plans to build anti-personnel weapons based on "cognitive engineering." The result may be a wide range of Non-Lethal Weapons with human effects similar to those associated with Artificial Telepathy.

"For the Controlled Personnel Effects capability, the S&T panel explored the potential for targeting individuals with nonlethal force, from a militarily useful range, to make selected adversaries think or act according to our needs. . . . By studying and modeling the human brain and nervous system, the ability to mentally influence or confuse personnel is also possible. Through sensory deception, it may be possible to create synthetic images, or holograms, to confuse an individual' s visual sense or, in a similar manner, confuse his senses of sound, taste, touch, or smell."

AFRL controls a vast array of exotic laser and microwave weapons, and it has its very own Space Directorate and satellite system. The AFRL’s Directed Energy Directorate has a budget of more than $300 million per year.

In other words, the Joint Non-Lethal Weapons Program could certainly ask AFRL to launch an Artificial Telepathy program, and AFRL has the capabilities to do so.
Posted by M at 10:58 PM