The Militarization of Neuroscience 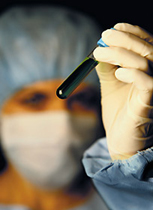 When military scientists begin to combine "cognitive engineering" and neuroscience with genetic engineering, we could see a nightmarish new generation of biological weapons and nerve agents that radically alter the minds, emotions, memories and beliefs of everyone on earth.

That's the opinion of Mark Wheelis and Malcolm Dando, authors of "Neurobiology: A Case Study of the Imminent Militarization of Biology" published September 30, 1995 in the International Review of the Red Cross. See this site for a PDF of the full article:


Abstract: The revolution in biology, including advances in genomics, will lead to rapid progress in the treatment of mental illness by advancing the discovery of highly specific ligands that affect specific neurological pathways. The status of brain science and its potential for military application to enhance soldier performance, to develop new weapons and to facilitate interrogation are discussed. If such applications are pursued, they will also expand the options available to torturers, dictators and terrorists. Several generic approaches to containing the malign applications of biology are shown, and it is concluded that success or failure in doing so will be significantly dependent on the active involvement of the scientific and medical communities.

Translation: The medical community has got to stop sitting on its duff and get some international legislation passed prohibiting the development of these bioweapons NOW.

I would add: An equally serious effort needs to be made to block military application of EM weapons to the human brain. The pretence that such weapons are "less than lethal" is a serious misunderstanding of the immense threat that they pose to the privacy and civil liberties of every man, woman and child on the face of the globe.
Posted by M at 9:25 PM