TANGRAM: Artificial Telepathy as a form of "Total Information Awareness" 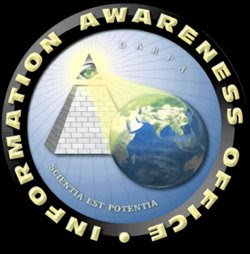 Does the Unites States government use Artificial Telepathy and remote viewing to track terrorists? Signs point to yes.

In fact there are fascinating connections between the National Security Agency and three spooky defense contractors who have played key roles in the development of artificial telepathy, remote viewing and the TANGRAM terrorist tracking system.

The Big Three in Telepathy

These three firms have played key roles in the government's psychic spying programs:

Mind reading as a form of "Total Information Awareness"?

As mentioned in the last post, the Department of Defense launched a "Total Information Awareness" (TIA) program shortly after the terrorist attacks of September 11, 2001.

Despite efforts by the United States Congress to kill the TIA in 2003, the core of this massive data-mining program has been renamed TANGRAM and moved quietly to an office on the campus of the National Security Agency, the "Puzzle Palace" where some of the nation's brightest mathematicians break codes and ciphers.

The NSA is exactly where one would expect the government to park a spy program focussed intensely on sorting out massive amounts of puzzling information. The United States undoubtedly needs to track terrorists.

The only problem is, the NSA spymasters do not seem to be satisfied with merely tracking foreign nationals who pose a clear and present danger to the security of the United States. Civil rights activists claim that the NSA has begun digging far too deeply into the private communications and private lives of domestic civilians who pose little or no threat at all.

In fact, from the information gathered by this blog, it would appear that the NSA's concept of "Total Information Awareness" involves not only spying on domestic telephone traffic, bank transactions, email and computer communications, but also electronically penetrating the inner most thoughts of "suspects" via artificial telepathy and remote neural monitoring.

For an article on remote neural monitoring, see this link: http://wiki.answers.com/Q/Is_remote_neural_monitoring_a_reality

For legal documentation of the claim that NSA is using remote neural monitoring to perform surveillance on U.S. citizens, see the case of John St. Clair Akwei vs. NSA, here:
http://www.angelfire.com/or/mctrl/akwei.html

For an article on the original "Information Awareness Office" (IAO - a mass surveillance and terrorist tracking program established by the Defense Advanced Research Projects Agency back in 2002) see the Wikipedia article at this link: http://en.wikipedia.org/wiki/Information_Awareness_Office

Attempts to Kill the TIA Failed

The article at the link above clearly indicates that Congress defunded the TIA program in 2003, partially in response to a firestorm of civil rights complaints. However, the article also states unequivocally that TIA was not killed: "the core of the project survived."

The key programs within TIA were simply renamed and relocated. They were moved to "hundreds" of shadowy R&D units overseen by the National Security Agency and the Office of the Director of National Intelligence.

One such unit is now working on a mass data-mining and surveillance program called TANGRAM. And, as noted above, three of the major contractors working on TANGRAM were deeply involved in the development of artificial telepathy and remote viewing.

According to the National Journal, the lead subcontractors for the Tangram terrorist tracking system are Stanford Research Institute International, Booz Allen Hamilton, and 21st Century Technologies.

The roles of Booz Allen Hamilton (a major CIA contractor) and 21st Century Technologies of Austin, TX, deserve further exploration. They will be examined in future posts.

For now, it is sufficient to note that Booz Allen and 21st Century both were contractors on the original Total Information Awareness program and BAH certainly brings together, under one roof, several key players in artificial telepathy programs, including former directors of the CIA, the NSA, the Office of the Director of National Intelligence and the U.S. Space Command.

This last point cannot be emphasized enough: Booz Allen acts as an important "black box," a sort of Shadow Government Inc., that links the folks at NSA, the National Reconnaisance Office (NRO), NASA and the U.S. Air Force -- all key players in the research and development of Artificial Telepathy. Each of these agencies use the sophisticated supercomputers, space platforms and satellites run by the U.S. Space Command.

For a refresher on the use of military satellites as Psychotropic Space Weapons, see:
http://www.bibliotecapleyades.net/ciencia/ciencia_nonlethalweapons08.htm

For an overview of the vast number of defense contracts run by Booz Allen Hamilton, see the defense page of their website:

The 21st Century Technologies website may be found here:

More on TANGRAM: A Key Piece to the Puzzle

The survival of the "outlawed" TIA program and the existence of its replacement -- TANGRAM -- were revealed by Shane Harris in a February 2006 article for the National Journal titled "TIA Lives On."

See the original article at this link: http://www.nationaljournal.com/about/njweekly/stories/2006/1020nj3.htm

Mr. Harris clearly identifies SRI, BAH and 21st Century Technologies as the main contractors for research and design on the new TANGRAM team overseen by the National Security Agency. Documents undearthed by the National Journal also show that TANGRAM performs essentially the same "information extraction" functions as the Total Information Awareness system that was defunded.

More importantly, Mr. Harris identifies the office that now serves as the secret hub of the all new and improved TIA system.

According to Harris, 'Two of the most important components of the TIA program were moved to the Advanced Research and Development Activity, housed at NSA headquarters in Fort Meade, Md., documents and sources confirm. One piece was the Information Awareness Prototype System, the core architecture that tied together numerous information extraction, analysis, and dissemination tools developed under TIA. The prototype system included privacy-protection technologies that may have been discontinued or scaled back following the move to ARDA.

"A $19 million contract to build the prototype system was awarded in late 2002 to Hicks & Associates, a consulting firm in Arlington, Va., that is run by former Defense and military officials. Congress's decision to pull TIA's funding in late 2003 'caused a significant amount of uncertainty for all of us about the future of our work,' Hicks executive Brian Sharkey wrote in an e-mail to subcontractors at the time. 'Fortunately,' Sharkey continued, 'a new sponsor has come forward that will enable us to continue much of our previous work.' Sources confirm that this new sponsor was ARDA."

The Role of SAIC - Another firm linked to Remote Viewing

Students of Artificial Telepathy will be fascinated to learn that Hicks & Associates of Arlington, VA, the firm mentioned above as the designers of Tangram's computer prototype, became the "policy and analysis" branch of Scientific Applications International Corporation (SAIC) in 1991. SAIC is the California-based firm that took over the Defense Intelligence Agency's Stargate remote viewing program in 1991.

Put another way: The Stargate guys are now building the computer "brain" of TANGRAM, the new Total Information Awareness system.

For the link between Hicks and SAIC, see this webpage:
http://www.saic.com/natsec/policy-analysis-consulting.html

An interesting Wikipedia article on SAIC may be found here:

Further links between SAIC, the company that ran Stargate, and the Tangram "information extraction" program are spelled out in the Wikipedia article on the Information Awareness Office and its surviving components:

" TIA's two core projects are now operated by Advanced Research and Development Activity (ARDA) located among the 60-odd buildings of "Crypto City" at NSA headquarters in Fort Meade, MD. ARDA itself has been shifted from the NSA to the Disruptive Technology Office (run by to the Director of National Intelligence). They are funded by National Foreign Intelligence Program for foreign counterterrorism intelligence purposes.

"One technology, now codenamed Baseball is the Information Awareness Prototype System, the core architecture to integrate all the TIA's information extraction, analysis, and dissemination tools. Work on this project is conducted by SAIC through its Hicks & Associates, consulting arm that is run by former Defense and military officials and which had originally been awarded US$19 million IAO contract to build the prototype system in late 2002.[24]

"The other project has been re-designated TopSail (formerly Genoa II) and would provide IT tools to help anticipate and preempt terrorist attacks. SAIC has also been contracted to work on Topsail, including a US$3.7 million contract in 2005."


Conclusions: When we piece together the parts of the Tangram puzzle, above, we may deduce that Artificial Telepathy "black" programs are probably