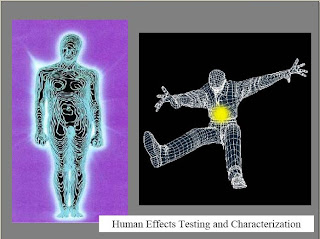 At right, one may see an illustration of Human Effects testing and computer characterization, as described in 2002 by Lt. Gen. Buck Bedard in a PowerPoint presentation on "The U.S. Department of Defense Joint Non-Lethal Weapons Program."

This illustration also represents what many Voice Hearers or "targeted individuals" describe feeling: As if they were wrapped in a cocoon of electromagnetic energy, with holographic images of another person's body being projected upon them. The TIs often interpret this as a form of astral projection, in which a ghost, evil spirit or demon is attempting to "possess" their body.

However, the phenomenon might also be described as an advanced form of body mapping. It's as if a 3D hologram of one person's body were projected or superimposed on the body of another person. The result would be more than simple verbal telepathy: It would feel disturbingly as if another person were inside one's own skin.

When irradiated from a distance, it is possible that a highly sophisticated data collection program (similar to the facial recognition programs used at airports) could "electronically photograph" the body of a human target, eventually building an extremely accurate, computer-generated 3D model, much like the ones shown in the photo above. A similar model could be created for the assailant. A computer could then be used to merge the two body maps.

The result would be an extremely powerful means for imposing sensory hallucinations on the target: Think of it as a form of 3D "voodoo doll" into which pins could be stuck. Such computer models would also provide a powerful means of modelling and measuring the "bioeffects" of different stimuli delivered by remote radiation or beam weapons.

A commercial version of 3D body modelling software (called "Poser") is now available on the market for less than $300. It is widely used by digital artists and graphic illustrators:

What we are describing here would be much more sophisticated, but certainly not outside the reach of military weapons labs. In fact, the Air Force Research Laboratory has developed a body modelling system for "realtime feedback of human effects and behavior effects" when testing Non-Lethal Weapons. It is called the Advanced Total Body Model (ATBM) system. A website and brochure describing ATBM may be found at this site:

While this certainly does not constitute proof that the Air Force is, in any way, testing out the "human effects" of Artificial Telepathy weapons on innocent civilians, or beaming voices into the heads of human targets, or using 3D holographic models to "virtually rape" and torture people, it suggests that the technology to do so may actually exist.

Certainly the Air Force has expressed an interest in mind control in the past. The following quote may be found at the mindjustice.org timeline, listed under the year 1996:

"Prior to the mid-21st century, there will be a virtual explosion of knowledge in the field of neuroscience. We will have achieved a clear understanding of how the human brain works, how it really controls the various functions of the body, and how it can be manipulated (both positively and negatively). One can envision the development of electromagnetic energy sources, the output of which can be pulsed, shaped, and focused, that can couple with the human body in a fashion that will allow one to prevent voluntary muscular movements, control emotions (and thus actions), produce sleep, transmit suggestions, interfere with both short-term and long-term memory, produce an experience set, and delete an experience set. This will open the door for the development of some novel capabilities that can be used in armed conflict, in terrorist/hostage situation, and in training . . . "

The Air Force Research Laboratory, in particular, has a very strong interest in testing Human Effects of pulsed weapons on human behavior for the reasons stated below.

"The Council on Foreign Relations Independent Task Force report on Non-lethal Technologies concluded that a major uncertainty in the use of non-lethal weapons is the question of human effects. The Center for Strategic and International Studies reported "The significant value of strategic applications on non-lethal technologies ...was predicated on the assumption that the weapons can be made to work as advertised. It is currently not known if they can."

"Although there is a sense of urgency to field NLWs today, the need to demonstrate that weapon payloads are effective against human targets and do not cause unintended harm is critical to mission success.

"The Joint Non-Lethal Weapons Program (JNLWP) began in 1996 as a Congressional initiative to provide warfighters with a family of NLW systems that have a range of optional non-lethal capabilities across the full spectrum of threats and crises. NLWs are defined as 'weapons that are explicitly designed and primarily employed so as to incapacitate personnel or materiel, while minimizing fatalities, permanent injury to personnel, and undesired damage to property and the environment.'

"The Master Plan for the JNLWP states, 'The successful use of NLWs is grounded in the user's level of confidence that consequences of their employment will decrease rather than increase the level of confrontation. To achieve this level of confidence, the health effects of the NLWs must be completely understood. Commanders in the field, when faced with the decision of which NLW to employ in a given scenario, must be able to confidently predict the most probable effects on people.' Human effects are fundamentally crucial elements of non-lethal weapons development and employment.

"Establishing an NLW human effects capability has been on a fast track over the last few years. First, the Joint Non-Lethal Weapons (JNLW) Integrated Product Team chartered the Human Effects Process Action Team (HEPAT). Then, the HEPAT briefed the concept for the JNLW Human Effects Center of Excellence (HECOE) to the Joint Non-Lethal Weapons Directorate (JNLWD). The HEPAT subsequently recommended that the DoD should establish a DoD NLW HECOE to serve as the centralized resource to ensure human effects of NLWs are adequately addressed as early as possible in the development and acquisition cycle and throughout the life cycle of the weapon system.

"AFRL and the JNLWD signed an historic Memorandum of Agreement (MOA) on June 7, 2001 at Brooks Air Force Base, Texas, that launched a new era in NLW development and established the HECOE . . . . The JNLWD selected the Human Effec-tiveness Directorate to manage the new HECOE based on the strength of its many contributions to non-lethal technologies effectiveness research during the last decade.

"NLW bioeffects has been a research competency for AFRL and its predecessors for over ten years. AFRL is one of many resources available to carry out JNLW-funded human effects research identified by the HECOE. The MOA between the JNLWD and AFRL provides the foundation for tapping scientific expertise throughout AFRL.

"Human effects are widely recognized as the "long-pole-in-the-tent" for most aspects of NLW operational utility, technical feasibility, and policy acceptability. The HECOE is the human effects "one-stop-shop" resource for NLW program managers, ensuring they have the data needed to make informed and educated decisions.

"Among other duties, the HECOE is developing a central repository of human effects data. The HECOE will analyze human effects for NLW program managers and recommend research to fill identified data gaps, coordinate human effects modeling and research efforts, and maintain a listing of qualified agencies capable of conducting research, testing, and analyses.

"Colonel George Fenton, JNLWD Director, emphasizes characterizing human effects as a foundation and core element of the JNLW program. The level of risk of injury or lethality to targets and the probability that a weapon will be effective against a spectrum of targets is important information for the weapon developer and the users in the field.

"To provide a solid foundation for characterizing the target response effects and the risks of unintended effects, the HECOE brought together a panel of world-class experts on risk assessment, medicine, and decision analysis who worked with DoD NLW subject matter experts, materiel developers, and program managers. This very successful workshop produced a report on risk characterization framework.

". . . . The HECOE published human effects evaluations on four candidate NLWs and is assessing data on stingball blunt impact and TASER® electroshock. NLW program managers are establishing working relationships with the HECOE, and management of the associated human effects research programs is currently on a reimbursable basis. "
Posted by M at 2:49 PM

Affordable Luxurious Wedding Dress Blog said...
This comment has been removed by a blog administrator.
8:11 PM