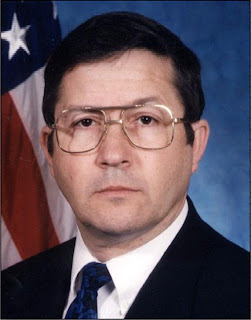 Dr. Murphy is apparently an associate of the Dr. Kenneth Boff, the Chief Scientist of the Human Effectiveness Directorate in 1998.

Biographical notes are scanty, but some information can be gathered from the following source:

He earned a BS in psychology from Occidental College, Los Angeles, and a PhD in neuroscience from MIT. In 1982 he returned to his home town for a position with the U.S. Air Force, first working on prophylactics/treatments for chemical warfare agents, and then moving to radio frequency bioeffects in 1992. From 1994-2004 he was Chief or the USAF Radio Frequency Radiation Branch. He is a member of the Bioelectromagnetics Society, the Directed Energy Professional Society, the IEEE Engineering in Medicine and Biology Society, and the IEEE Standards Board. He is active is the IEEE International Committee for Electromagnetic Safety, for which he serves as International Liaison.

http://www.he.afrl.af.mil/A04_ScienceAndTech/HE_Media/NewsLetter/Newsletter_Summer60.pdf
The photograph of Dr. Murphy (above right) and the biographical information (below) are taken from the announcement of the Air Force Science and Engineering award he received in 2003:

". . . . Due to his technical expertise and support of expanded human effects research of non-lethal weapons, his group earned the designation and funding as the Joint Non-Lethal Human Effects Center of Excellence in the DoD."

He is listed as an employee of Lawrence Livermore National Lab, which suggests he left AFRL. However, Dr. Murphy apparently still occupies a post of some importance at the HECOE. In August 2006, he was granted a fellowship award, one of AFRL's "highest honors."

The list of corporate sponsors for this event reads like a "Who's Who" of defense contractors with an interest in people-zapping:

http://www.deps.org/DEPSpages/extLinks.html
Posted by M at 4:03 PM

Affordable Luxurious Wedding Dress Blog said...
This comment has been removed by a blog administrator.
8:11 PM