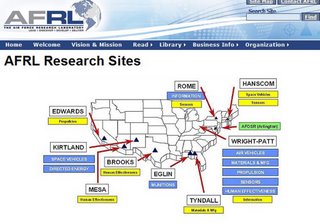 Headquartered at the Wright Patterson Air Force Base, Ohio, The Air Force Research Laboratory (AFRL) was "formed in October 1997 as the product of an organizational consolidation that integrated previously separate Air Force laboratories (Armstrong, Phillips, Rome and Wright-Patterson) with the Air Force Office of Scientific Research," according to the AFRL website.

The AFRL employs more than 9,600 people and consists of 10 directorates, situated across the country. (For a list of the directorates see the link above.) They oversee the Air Force's $1.2 billion annual Science & Technology (S&T) program. AFRL is considered one of the best, if not the best, research lab run by the Department of Defense.

According to the AFRL's "Mission & Vision" statement, "We defend America by unleashing the power of innovative science and technology"

An advertisement recently placed at usajobs.com echoes AFRL's obsession with lasers, phasers, satellites and other James Bond-like weapons: "The men and women of AFRL are creating the Air Force of the future -- turning science fiction into science fact."

Is this just the empty verbal posturing of an Air Force recruiter trying to make a ho-hum lab job sound exciting? Or could it be true?

In the last few posts, we saw evidence that AFRL plays a lead role in the DoD's efforts to develop "Artificial Telepathy" weapons, under cover of the Joint Non-Lethal Weapons Program. Specifically, the chief scientist of the AFRL's Directed Energy Directorate (the "people zapping" unit) has stated that

"By studying and modeling the human brain and nervous system, the ability to mentally influence or confuse personnel is also possible. Through sensory deception, it may be possible to create synthetic images, or holograms, to confuse an individual' s visual sense or, in a similar manner, confuse his senses of sound, taste, touch, or smell."

The Directed Energy Directorate and the Space Vehicles Directorate are both located at Kirtland Air Force Base, N.M., at the site of the former Phillips Laboratory. The fact that they are located right next to each other clearly implies that both directorates share a common mission: using space vehicles to zap people on Earth.

AMOS has a unique capablity: "the capability of projecting lasers into the atmosphere, which is unusual at astronomical sites." Those among the tin-foil-beanie crowd who believe that the government is beaming voices into their heads will find very little comfort in this fact. Given that people-zapping seems to be one of AFRL's favorite hobbies, why not look upon AMOS with some discomfort? Modelling the effects of beam weapons upon a human brain would certainly require supercomputers, and that's exactly what the military scientists at AMOS possess.

In the last post, we examined the command and control structure of the Joint Non-Lethal Weapons Program (JNLWP), and it clearly indicates that AFRL plays a lead role in the JNLWP's study of Human Effects or Bioeffects, that is, the controlled effects that directed energy beams may have upon human minds and human behavior.

In fact, AFRL has an entire directorate, based at Wright Patterson AFB, devoted to the study of Human Effects (HE). They explore such research topics as "Three-Dimensional Audio Technology," "Microwave Research on Memory Loss," "Non-Lethal Weapons Human Effects," "Auditory Distance Perception of Speech," and "Three-Dimensional Auditory Localization of Nearby Sources."

Nearby neighbors in the San Antonio region include:

AFIOC is "engaged in a myriad of activities supporting its role as the Air Force's information warfare executive agent. It integrates information warfare tactics, training and technology for combatant commanders. The center is comprised of about 1,000 military and civilian members trained in the areas of operations, engineering, operations research, intelligence, radar technology and communications and computer applications."
http://www.aia.af.mil/units/afioc/index.asp

Translation: AFRL's Human Effects lab in San Antonio is running in tandem with the DoD's premiere "Information Operation" centers in San Antonio, and together they are all serving DoD's PSYOP (mind control) planners.

Those who believe that the U.S. Department of Defense does not engage in mind control operations are cordially invited to read the definition of Influence Operations (IO) contained on Air University's "Cyberspace and Information Operations" page:

All of this PSYOP technology is most certainly employed as a weapon. See, for example, the article "Mapping the Minds in Iraq's Regime" by William M. Arkin in the Los Angeles Times, September 1, 2002.

Does the U.S. government use "influence" operations and PSYOP strategies against foreign civilians? Well, yes, but they don't call it PSYOP. When dealing with civilians, they prefer to use the term "Perception Management." The following definition is rather enlightening:

For some sobering reading on perception war and perception operations, see:

Given the powerful suite of psychological weapons and tools available to the Department of Defense, is it so difficult to believe that government officials at the top of the command chain would use the same tools when trying to "manage" the perceptions of U.S. citizens?

Given the AFRL's intense interest in studying the "human effects" of directed energy weapons on the human mind, is it so difficult to believe that they might want to test their fun new toys on the minds of innocent civilians?

How else are such weapons to be tested in a real-world environment?
Posted by M at 10:38 PM

Affordable Luxurious Wedding Dress Blog said...
This comment has been removed by a blog administrator.
8:14 PM